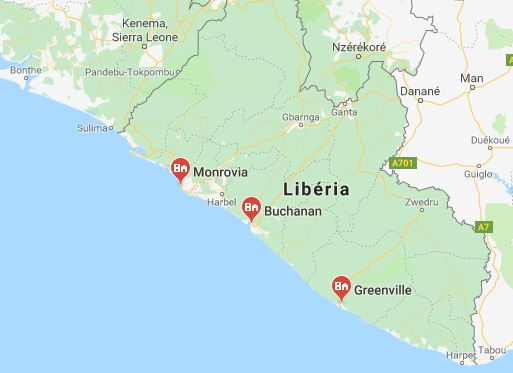 Africa’s oldest republic, Liberia, was first declared
a nation in 1847 by the freeborn and freed black Americans who had emigrated
there in 1821 to a country of their own.
Their descendants became the ruling class of a nation whose indigenous
population was excluded from government.

In the 1950-1970’s, when the African continent experienced
turbulent times as it moved away from colonialism, Liberia remained a tranquil
force and was an active partner in the creation of the African Union.  With its strong ties to the U.S.A., abundant
natural resources including minerals, rubber and timber, the country was both
economically successful and stable for several decades.

The country’s development took a major downtown
between 1989 and 2003, when two bloody civil wars raged. Warlords, some
supported by indigenous ethnic groups, fought for power.  250,000 people were killed and one million
people fled.

The conflicts were disastrous for the country’s
infrastructure and development, but once the wars ended in 2003, economic
growth resumed.

However, Liberia’s economic recovery was dealt a
further blow by the 2014 Ebola outbreak which caused at least 11,000 deaths
before it ended in 2015.

Fortunately, economists believe that Liberia’s
strategy for broad-based economic growth and employment creation along with its
wealth of natural resources, give every indication that the country will once
again bounce back.

Despite all the difficulties which this country has
experienced, Budd and its surveying branch, Wiggins, have been present in
Liberia for fifteen years during which time they have regularly assisted
P&I Clubs and their members while building strong relationships with some
of the local key players such as Maersk, Grimaldi and Bolloré.

Budd Liberia has provided the following description of
the country’s ports.

This terminal operates under the supervision of APM
Terminals Liberia, Ltd.

There is parking for cars, containers (Dry &
Reefer), an administrative building, a technical yard, a weighbridge and a
Health, Safety, Security and Environmental office (HSSE) which is directly
responsible for access control within the terminals.

This berth is directly linked to an oil terminal and is
reserved exclusively for petroleum vessels.

Previously known as the Bong Mines Pier, this berth
has been reconstructed and managed by China Union to meet international
standards. Due to the fall of iron ore price on the world market, the pier is
mostly used to berth fishing/frozen and petroleum vessels.

This berth should have been reconstructed by Western
Cluster Limited to accommodate all types of vessel especially iron ore
carriers, but this has not been done as APM Terminals is the sole user of the
berth, especially when the main port berths are occupied.

The Port’s Management and the Health, Safety, Security
and Environment office (HSSE) are both responsible for issuing the passes which
give access to the Port and Terminals.

Applications for port passes have to be addressed to
the Access Control (Port Management) and HSSE (APM Terminal) offices.

The HSSE is responsible for strict control of access
to the terminals which is approved by the Head of Operations.  The  movement of individuals within the
terminals is coordinated by the HSSE and operations offices.

The berths are too short for longer vessels.

For example, Grimaldi’s vessels take up at least the
whole of one berth and half of the one next to it.  Since there are only three berths, if such a
vessel is at quay, no other vessel can berth until the longer vessel leaves.

There are serious issues when it comes to discharge
operations of bulk cargo vessels.

Shipowners will need to be protected from the
following:

Ø Overloading
of slings by stevedores.

Ø The
extraction of bags between ship and warehouse.

Ø The
deliberate modification of discharge figures by other parties to suit the
receivers during and after discharge operations.

Ø The
proximity of the sole cargo underwriting company with all the receivers.

Ø Absolutely
no competitor to the only underwriting company in Liberia.

Ø Other
parties take instructions from the receivers through the underwriters.

We recommend the appointment of an independent
surveyor to monitor discharge operations and the assistance of an experienced
local P&I correspondent to negotiate any cargo claims.

In
addition to the main port of Monrovia, Liberia has two smaller international
ports:  Buchanan and Greenville.

Built in 1960 by the Liberia-American Swedish Mining
Corporation (LAMCO) to facilitate the export of iron ore from the Nimba range, Buchanan
has both general cargo and iron ore quays.

The Nimba iron mine closed in 1991 but from 2005, ArcelorMittal invested
heavily to make the port suitable for exports from the Yekepa iron mines.

The Yekepa-Buchanan railroad has been reopened and accommodation has been
built for workers.

In addition to iron productions, Buchanan’s exports include rubber, palm
oil and a biofuel made from chips of rubber tree trunks.

Buchanan is situated about 170 miles southeast of Monrovia.  Thanks to aid from the World Bank,
rehabilitation of the main road linking the two ports started in 2007.

The harbour is protected by two breakwaters on either side of the 210
m-wide access channel.  The channel has a
depth of 14.95 m below chart datum.

Bunkering is
possible in this port.

This very small port in Sinoe County was severely affected by the civil
wars and is still in the process of rehabilitation. Wrecks have been removed
and constructions have been rebuilt or repaired.

The infrastructure surrounding the port remains very poor with the result
that commercial goods are twice as expensive in this area than they are in the
capital, Monrovia.  Improved sea
transport is seen as a way of reducing costs and improving links with the
capital.

The county itself is rich in natural resources such as gold, timber and
agricultural products including palm oil.

At the time of writing, Greenville port can only accommodate vessels with
an overall length (LOA) of 85 m.

Berthing and unberthing of 85 m vessels is only possible during daylight,
at high tide, with the assistance of divers and once buoys have been planted at
the entrance and in the basin. A tug is also required.

Liberia has demonstrated a remarkable ability to overcome tragic events and
has the resilience and natural resources to feed economic growth.

Nevertheless, the country continues to face many challenges and vessels
calling in Liberian ports are well-advised to seek the assistance of an
independent surveyor to monitor loading or discharging operations.

As established P&I Correspondents in Liberia, Budd’s Monrovia office is
a valuable ally for all vessels calling in Liberian ports and can appoint
reliable, experienced Wiggins’ surveyors for all types of survey intervention
or handle any claim or personal injury issue.

For tallies, Wiggins Liberia has the advantage of having a contractual
relationship with ten tally clerks who work exclusively
for them.  In view of the issues frequently
faced by vessels discharging in Liberia, this enables us to ensure that the
vessel’s interests are fully defended.

Budd Liberia benefits from the coordination and
support of the Area Manager for Guinea, Guinea-Bissau, Liberia and Sierra
Leone, Mr Fode Mario Camara.