Insecurity, rumors and suspicion are hampering the efforts of aid agencies to combat the latest Ebola outbreak in the Democratic Republic of Congo. 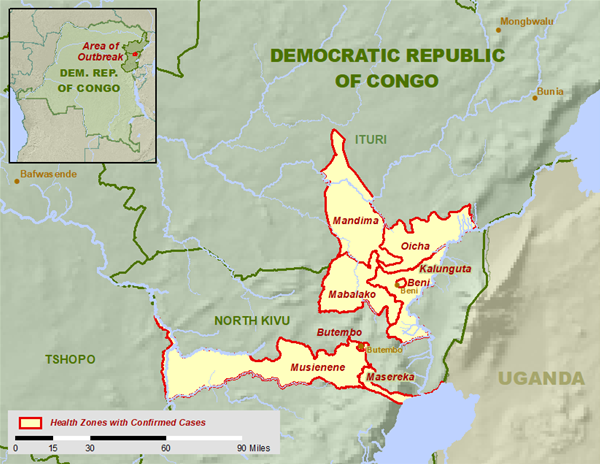 The Ebola
outbreak in the eastern provinces of Ituri and North Kivu started in August
2018, only a few days after May’s outbreak in the Equator province (North-West
DR Congo) officially ended.

Earlier this
week, an ambulance transporting an Ebola victim to a cemetery in the region of
Beni (North Kivu Province) for safe burial was ambushed by a group of young
skeptical locals.  Two of the three
Congolese Red Cross volunteers on board the ambulance were seriously injured.

As in the 2014-16
Ebola epidemic which affected Guinea, Sierra Leone and Liberia, the Democratic Republic
of Congo’s local population has a strong tradition of home care using
traditional medicines and is both reluctant to accept and suspicious of the
quarantine measures and safe burial practices required to limit contagion.  Rumours that the disease is the result not
the cause of the treatment abound and patients have been known to leave
healthcare facilities or avoid monitoring by aid workers, thereby increasing
the risk of infection in those around them.

The situation
in North Kivu Province is particularly critical because the local population
and aid workers also face major security issues.  Since 2014, North Kivu Province has been the
site of repeated massacres, often perpetrated at night.  Thousands of women, children and men have
been killed or kidnapped by rebel militias.  Despite a heavy military presence, 21 people
were killed in the latest attack which took place in the town of Beni on 22
September2018.

Claiming that
the massacres have killed almost two thousand people since they began, local
leaders declared a period of mourning from 24-28 September and a general strike
(journée ville morte) on 1 October to demand the intervention of non-Congolese
military forces in the area.

Unfortunately, the mourning shutdown and strikers’ demonstrations made further impeded Ebola aid workers in their tasks of patient identification, care and monitoring,
and safe burial of the deceased.

In its 4
October report, the World Health Organisation (WHO) advised that their
anti-Ebola operations are now back to full scale but raised its national and
regional risk assessment level from “high” to “very high” in view of both the
security concerns and the fact that the affected areas now span hundreds of
kilometres and spread into new insecure areas in the Tchomia Health Zone near
the Ugandan border.

The Ministry of
Health, WHO and all the main medical NGO’s are working together to vaccinate,
treat and contain the disease.
Neighbouring countries have been put on alert and measures are being
taken to strengthen their emergency public health operations.

WHO does not
recommend the implementation of travel or trade restrictions with the
Democratic Republic of Congo at the present time, and no countries have
introduced any such measures.

Budd’s local offices confirm that the country’s
capital, Kinshasa and the ports (Matadi, Boma, Banana) over a thousand miles west of Ituri and North Kivu Provinces remain unscathed and no sanitary or restrictive measures are in force.