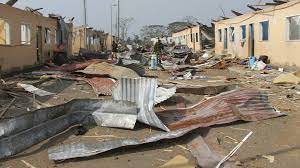 Budd’s Equatorial Guinea office reports that the port of Bata remains open despite a series of explosions which hit the town at around 13:00 on Sunday afternoon (07/03/21).

A total of four explosions occured when military munition stores were accidentally ignited by agricultural fires near Bata’s Nkoantoma Military Base. Shock waves and fire swept through the city destroying buildings.  At least 98 people have been killed and over 615 have been injured.

Equatorial Guinea’s President has said that the tragedy was caused by negligence of both the farmers and of the military.  He has ordered an enquiry.

Almost all the homes and commercial premises in Bata, the country’s economic capital, were affected and the country has appealed for international aid to help the 800,000-strong local population.  Hospitals have been struggling to cope with the flood of wounded and blood supplies are low.

The Spanish government has promised to send aid.

Although Bata’s port is open, the damage to the town may mean that some roads will be closed.

We extend our deepest sympathies to our colleagues in Bata, some of whose family members who have been directly affected.