Last month, Gabon’s President, Mr Ali Bongo, officially
inaugurated the New Owendo International Port (NOIP), some 18 kms south of Libreville.  The new facility first opened for business in
June 2017 and offers a 25% reduction in handling costs while doubling Owendo’s
capacity.  It provides extended
transatlantic opportunities for trade and should result in a reduction in the
cost of living for the Gabonese who rely heavily on imported goods. 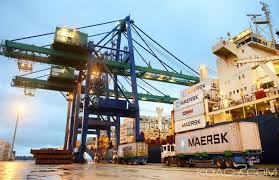 Gabon is currently the fifth largest oil producer in
Africa but it also has well-established timber and mining industries.  To consolidate its economy, the country aims
to reduce its dependence on crude oil, to diversify its use of sustainable energies
in and around the ports, and to promote Gabon’s exports of wood, agricultural
and mined goods.

The New Port comprises a two-berth 420-metre quay with
both fixed and gantry cranes to handle up to 150,000 containers a year and
reduce the duration of port calls.  Four
grain silos and seven palm oil tanks complete the new port’s facilities.

This
latest development is one of several joint ventures which have extended and
enhanced Gabon’s ports in recent years.