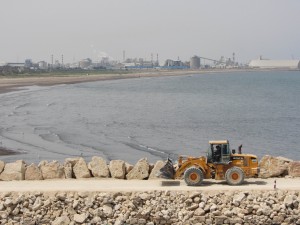 Gabes’ Industrial Zone seen from the port of Gabès

A sit in which started at the
port of Gabès on Tuesday, 19 March 2019, has effectively prevented any vessels
from discharging the pet coke which fuels local cement works.

In recent years, serious
concerns have been raised about pollution caused by Gabès’ chemical, fertilizer
and cement plants.

On 12 March 2019, the Regional
Union of Work (Union Régional du Travail)
called for an end to all pet coke discharges, the creation of container
shipping line, a pollution premium and the organization of an inter-ministerial
workshop before the end of this month to find solutions to the problems raised.  The Union claims that the authorities have
failed to meet the obligations agreed in past negotiations where pet coke and
environmental protection are concerned

At their 19 March meeting, Gabès’
Regional Council also called for an immediate end to pet coke discharge and a sit
in at the commercial port’s entrance was organized by various environmental
groups.

Budd’s Gabès and Tunis offices
confirm that no pet coke has been discharged in Gabès since Tuesday.